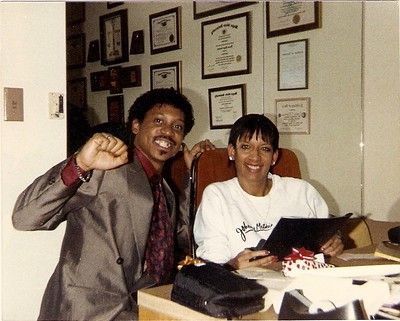 Top Of Their Class

In 1974, at the age of 19, an article appeared in an Ebony magazine about Mr. David Franklin, a black entertainment lawyer based in Atlanta, GA who was doing great things. He represented at the time, Richard Pryor, Anita Ward, Roberta Flack, Donny Hathaway and later on Peabo Bryson. Since the Payne family is from Atlanta, I called my Aunt Flossie and asked her to look Lawyer Franklins' number up in their local yellow pages. Being young and naive, I called and asked if he would represent me. After it was agreed that I really didn't have a clue about the inner workings of the music business, he asked me to wait 15 mins. so that he call a young lawyer fresh out of law school to see if he would talk to me and perhaps advise me on the steps that I should take to pursue a career in music. This new lawyer was located in New York City. After my 15 mins were up he told me to call the telephone number he had given me and ask to speak with a lawyer named Kendall. I waited the 15 mins., called the New York number, and spoke for the first time to Lawyer Kendall Minter. He has been my entertainment lawyer ever since.

In 1982 an article appeared in a Jet Magazine about an entertainment lawyer based in Chicago, IL. Her name was Attorney Linda Mensch and she had helped a few artists get record label deals. I was able to call Lawyer Mensch and set up an appointment to fly out and meet with her in person. At that meeting was myself, Eric Hayslett and my brother Tony Sayles, acting as our bodyguard while in Chicago.

Impressed by a ballad I played for her, "Maybe If I Cry", she then proceeded to tell me that perhaps she could help me get signed to a small independent label because Rap was beginning to take hold and my style of music may be going out of vogue. Needless to say, I didn't agree with that proposal and decided to pass. However, she and I remained friends for the rest of her life. I advised several up and coming artists looking for an entertainment lawyer to seek her out over the years.

Her most celebrated client among others was R. Kelly.

In 1985, I was given an Ebony Magazine that contained a feature on two twin sisters based out of Detroit, MI who had both gone to school and become entertainment attorneys. Their law/management firm was called LLoyd & Lloyd Attorneys at Law. The article discussed how they had helped a Flint, Mi band get signed to a major label deal. That group was called "Ready For The World". I decided to call them and was always told that they were either in a meeting or call back next week. So, for the next 6 months, I called every Monday morning at the exact same time until one of the twins actually spoke to me. She asked when I could get to Detroit and it was decided that since I had a day job we could meet on a Saturday. I flew into Detroit on a Friday evening, stayed with some relatives, and met with both sisters the next morning. I played them my song on cassette, "Maybe If I Cry", then proceeded to perform acapella some of my other songs all with my famous hand motions and spins. They agreed to take me on as a client and set me up with a producer to record a high quality demo to present to MCA Records. They advised me to form a group as well. That group would become myself, Eric Hayslett and Marlon Bankston, "3PM". Unfortunately, our MCA Records deal never materialized. The twins also managed the group "Kiara", a group called "Merge" with my friend to this day Ray Wilmbley, and a female artist that simply went by the name "Davina". As far as I know, we were the only group from the Midwest they ever managed.

In 1994, my Uncle Eddie Boyd passed away. My Uncle Eddie was abandoned as a child and took in and raised by my maternal grandmother. Once 18 years of age, he went into the Navy, became very good friends with a fellow sailor named Arthur E. Payne, Jr., and upon discharge, he invited this sailor to come to Kansas City with him and meet his family before going back to his hometown of Atlanta, GA.  Arthur met Maxcine Metcalfe, his sister, and never went back home to Atlanta. Uncle Eddie eventually moved to California, met and married my Aunt Lydia who had children by a previous marriage. One of the children was Carl Douglas who would go on to become an entertainment lawyer working side by side with attorney Johnnie Cochran. After my Uncle's service which was held in Long Beach, CA., I was introduced to Johnnie Cochran. He had been told that I was a songwriter and although I informed him that I already had an attorney in Lawyer Minter, he said, "I know Minter, he handles the East coast, I handle the West coast. If you have any dealings out here, have them call me".  That was Johnnie Cochran - (RIP) 1937 -2005

As Lawyer Minter would say..."We Are All Connected"

To The Top Of Page

to home
Back to Our Partners & Friends